It happens all too often. You’re sat having a chat with friends, reminiscing about the good old days when your free time consisted of tire swings and tree houses opposed to buying tires for your car and decorating another room of your house; then talk turns to “Aww remember *insert awesome nugget of childhood nostalgia here*”. Well it happened to us today, and that awesome nugget of nostalgia happened to be our favourite childhood food (mainly chocolate and sweets, obviously!). We’ve had a good look into the nation’s old favourites and were surprised at how many we’ve let slip off our radar! So get ready to get hungry (and angry once you realise you can’t get your mits on these anymore!) and check out some of Atomic Threads’ all time favourite childhood foods!

Basically they were like eating half a packet of After Eights in one handy pyramid shaped lump! After the massive response to Cadbury’s Creme Eggs, Terry’s realised there was a huge market for sickly, goo filled chocolate – but instead of limiting their sales to the Easter period with an egg shape, they created a pyramid to enable them to market it all year round. Unfortunately this wasn’t enough to compete with Cadbury’s sales and the chocolate disappeared from the market just about as quickly as it entered. Nevertheless, we thought they were amazing…even if you did end up a mint fondant covered mess by the time you’d finished it!

To be completely honest, we hadn’t even realised these were off the shelves – but you know how it is, you always want what you can’t have and now we reeeeally want some! There was original, strawberry, banana and chocolate flavour – one of which always got fobbed off to your siblings (banana – every time!) and you couldn’t eat just half a packet, you had to give your parents a vomit-scare by eating them until you were green in the face and your teeth hurt! We’re not sure how all our fillings would hold up nowadays though… On second thoughts, maybe it’s a good thing we can’t buy them anymore. 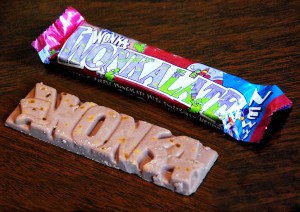 So, we’re guessing some of you might be thinking “What the… When did that happen?!” – but the kids of the 00s will remember how awesome it was having 1) A purple chocolate bar and 2) A purple chocolate bar with ‘Snozberry’ Nerds in it! We’re sure the parents of the era will remember desperately trying to steer their offspring away from the overpriced, E-number packed bar of pure sugar which, if it hadn’t been discontinued would’ve lead to some pretty pricey dentist bills in the future! But you’ve got to give it to them, there was no other chocolate bar that took you into the  dreamland of Wonka like this one did!

“You can’t trust anyone to keep a Secret!”

Yet another unresistably sickly bar of calorific goodness – the Nestlé Secret! For those of you who don’t remember it, it was a bird’s nest styled chocolate bar with a creamy filling, almost like a Walnut Whip in bar form. Unfortunately, the bar was taken off the shelves due to high production costs and a low volume of sales, so it’s unlikely we’ll see this back in the shops again 🙁 We heard the closest you’ll get to it now is the M&S version of the Walnut Whip but we doubt it’ll come close to the real thing… *sigh* 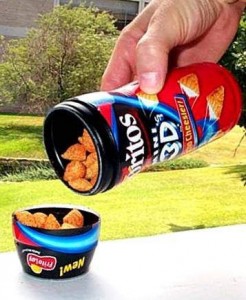 Okay, so we know they aren’t sweets or chocolate but we thought you’d be feeling a bit sick by now so we’re giving you a savory break! 3D Doritos were just another marketing fad – A DELICIOUS ONE! Although we were pretty much paying 50p for some cheesy flavoured air, we couldn’t resist them. Remember, this was before the ‘3D or die’ world we now live in so obviously people were going to get crazy – until they realised all crisps are 3D. Yeah, have fun trying to eat a 2D crisp.

“A taste of the Caribbean”…

So next up we’ve got the Rowntrees Cabana bar – which we’ve got to say, has gotten some mixed reviews here at Atomic Threads! Half of us remember it being the nicest chocolate bar ever; and the other half either don’t have a clue or remember them being absolutely disgusting! We’ve got to admit, on paper they sound kind of gross – but in reality they were the only chocolate bar you could get which had that amazing coconut and cherry combo! Okay, we still have the Bounty but… IT’S NOT THE SAME, DAMMIT! Oh yeah, and be prepared to have that song in your head all day – you’re welcome! 🙂 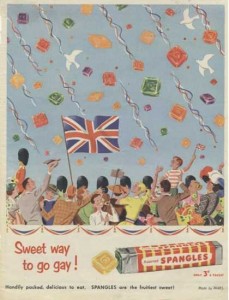 Not really a slogan you’d find on sweets nowadays, but seeing as Spangles entered the market way back in the 1940s when gay obviously meant to be happy or carefree, nobody batted an eyelid. These fruity rounded off squares with their trademark dimple in the middle were marketed in the UK from 1948 all the way up until 1984, when they were taken off the shelves after there was concern about tooth decay in consumers (always the sign of a good sweet in our opinion!). We did see a comeback briefly in 1995 but only in the orange and blackcurrant flavours, and in 2008 they were named the sweet that British consumers would most like to see revived!

“Get your tingue in a twost!”

Aaaah, Spira! Remembered mainly for it’s partially hollow centre – making it totally acceptable to suck up hot drinks through it so it melted in the middle! It’s a simple quirk but it’s definitely one we miss 🙁 We’ve tried it with other bars but none of them work quite as well as the Spira… FYI the closest we got was a Twix, surprisingly! There are multiple petitions online to bring the chocolate bar back, but the largest we found was a Facebook group called “BRING BACK THE CADBURY’S SPIRA” with 1,387 fans – we think everyone should go and join so we can once again have our chocolate laced cuppas! 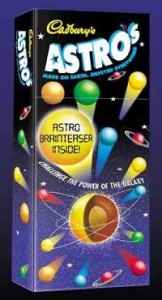 The closest thing you’ll find to a gobstopper that isn’t a gobstopper – crispy sugar coated balls of chocolate with a malty biscuit centre! These things were tasty but god damn they must have been the hardest thing to crunch through, ever! Once you got over the broken teeth part though, they were amazing! If you remember these and you want a blast from the past, we found them on Amazon from a seller called SOUTH AFRICAN FOODS as they’re still widely available over there – gimme gimme gimme!

Last up, the coolest yoghurts EVER!

Fiendish Feet– kicking Petit Filous’ butt while the fridge door was closed! They originally came in packs of four: Spooky Wooky (banana flavour), Fangs a Lot (strawberry flavour), Frank ‘n’ Stein (raspberry flavour), and Rattle ‘n’ Roll (chocolate flavour) but they released a load of new characters and flavours and even a cheese spread named ‘Cheesey Wheesey‘. Presumably these were taken off the market due to high production costs of the pots resulting in a higher cost for customers – otherwise we reckon these would still be on the shelves now!

So, that’s your lot! Now you can go back to your daily business… Or you could go and do a Pimp That Snack style bake-off with your friends to see who can get the closest to your old fave?! 😉 We know what we’ll be doing!